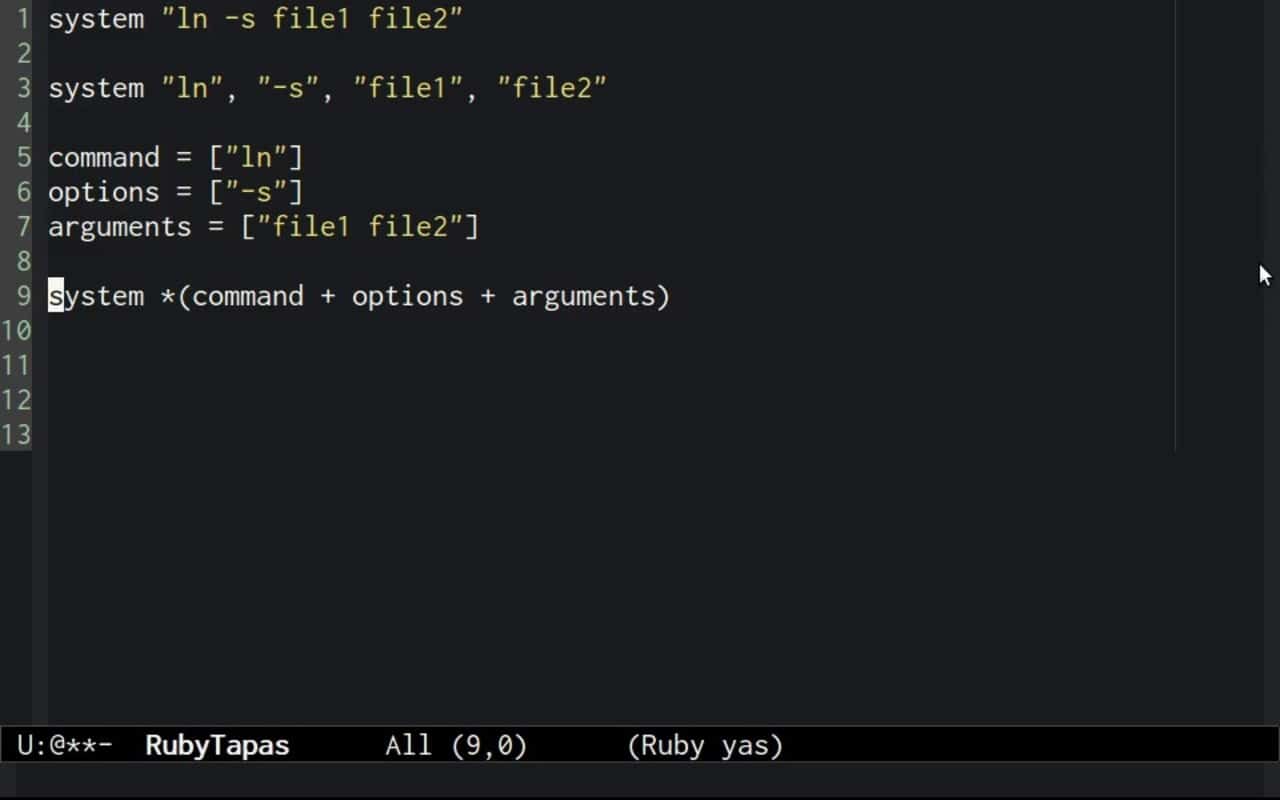 Using strings to build up command lines for execution is error-prone and potentially insecure. Check out why Ruby’s %W array-literal syntax is the perfect tool for writing, composing, and executing external commands!

I want to talk about one of my favorite literal syntaxes today. But first, a brief word on starting processes in Ruby.

Most of the Ruby methods for spawning external processes accept the command to execute in one of two different forms. Either you can pass a string:

Or you can pass a list of strings, each one of which will become a sequential element in the new process’ ARGV array.

There are a few reasons to prefer this latter form. First, it forces Ruby to run the command directly. With a single string command, in Ruby will pass the command to the shell to be interpreted. This adds overhead, may behave differently depending on the system’s default shell, and at worst, can open a program up to shell-injection attacks. When a command is passed as a list of strings, Ruby passes it directly to the operating system to be executed.

Another advantage of using the list form is that it makes it easier to build up commands incrementally. Let’s say we wanted to build up that last example from component parts. We have the command, the flags, and the arguments. Then we concatenate them together to form the full command line.

Can you see the problem here? We’ve left out spaces in between some of the arguments!

If we build the command up using arrays, we don’t have to think about ensuring there are spaces between the different components. We can build our command up with array concatenation, then use the splat operator to convert the array to method parameters.

However, this is a little more verbose than the string version. And that’s where one of my favorite literal syntaxes comes in: %W quoting.

With %W, we precede an array with %W, and then surround it with any delimiters we choose. Inside, we put the elements of the array. Each whitespace-delimited token becomes a string array element. I’ll stick with using square brackets ([]) for delimiters for these examples.

Here’s a simplified example from the script I use to record screencasts. I build up the final command from various subsets of flags and arguments.

All the values here are hardcoded. But what if I wanted to make parts of the command variable? For instance, what if I wanted to be able to change the width and height of the recording window? That’s where the real beauty of %W quoting shines. Unlike the %w form, %W enables interpolation, just like in double-quoted strings. So I can just define width and height variables, and then interpolate them into the appropriate place in the command line.

As you can see, in the resulting array the width and height have been interpolated in.

To conclude, using %W quoting to build up command lines has a number of advantages: